1.It is the right moment to celebrate the Tulip. After all the dark waiting, their burst of colour  is the quintessential signal that warmer days are round the corner. They are such a luxurious plant. A part of me can understand the Dutch Tulip mania which saw one bulb worth ten times the salary of an average worker, the price of a smart house. I would have been there, no doubt, my wife arching her eyebrows as I sold Hewitt mansions for an organ of perennation, Jack, with his beanstalk. And no, I don’t have any Bitcoin. Yet. 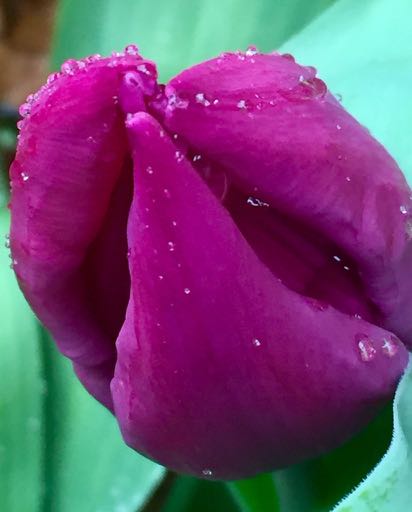 2. They are so mysterious and strange in their folds and contours. This Purple Prince looks like a trio of fingers to me. Other interpretations are possible. They hold raindrops nicely too, which was useful this week.

3. I think part of why we love them so much, is that they combine endlessly with other Spring plants. I find Euphorbia characias such good value in this respect. You could put any coloured Tulip in front of it and they would shine . It is the backdrop to the leading actors, if you want to use a cheesy theatrical metaphor about it. 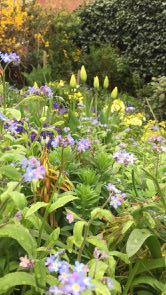 4. In a crowded, cottage style border, it is the clean yellow tulips which rise gracefully above the melee. Mrs W tells me they were bought 20 years ago on a visit to Keukenhof, the Dutch mecca for Tulips. I am amazed,quite frankly, that they survive, let alone thrive, in her solid clay borders. A lot of bulbs rot and decay on heavy soils and even on free draining gravel you can’t expect the same show from one year to the next. Tulips homelands are the near east, gentle mountain slopes and alkaline soil. They shouldn’t be happy in sodden clay.

5. These little wisps are Tulip sprengeri. The contrarian of the family, they flower late and like moist shade. It is a long term project as I just sunk a seed tray under my Lilac bush last Autumn and left them alone (well, I removed a few leaves and Bluebells which grew over them and generally acted like a mother hen). They reckon, “they will make a flowering sized bulb within five years”. Not sure I can mother hen it up for that long, but we will see!

6. Foliage. You have to say that Tulip foliage can be a bit annoying. Big and slow to die down and shading neighbours. It is the price you pay and a reason not to plant to thickly in a mixed border. I wanted to show the red-edged foliage of this minature Tulip linifolia, but the leaves are a bit marked by Winter and out of focus. Still, it would be great if more tulips had this kind of thin, pretty, fine foliage. Or is that just asking too much?