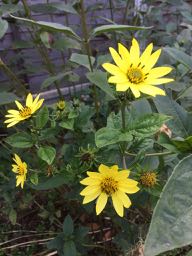 2. Helianthus Lemon Queen. Some people get sniffy about yellow and Helianthus in general. There is a school of thought that thinks if it is vigorous and bright it is inferior to slow growing and pale. A bit snobby. Being a snob, I tried Lemon Queen next to her more vigorous neighbour, the common perennial Helianthus. I have gotta say, I am underwhelmed. Yes, attractive pale flowers. But floppy, low and not really as good as her cousin. I will give her another go next year when the conditions might be better, but if the same thing occurs then she is out. 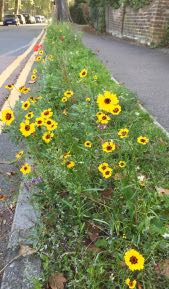 3. This roadside verge was cleared and seeded with a low-growing annual mix in April. For most of the long hot Summer I considered it a failure. I gave up on it. The weeds moved back in. However, now, with two decent showers, there is a show of reasonable proportions. Seeds and plants just know, don’t they?

4. That St Mary’s bed again. I just don’t get bored of it. It was kind of planned, but I am still pleasantly surprised by the combination of Miscanthus Morning Light, Salvia Armistad, Symphyotrichum novo-belgii Farncombe Lilac (isn’t that a mouthful?). Early Autumn seems to be the best season yet for this patch: low light, bit of mist, relaxed fullness. Lovely. I am still going to tear it up and rearrange it better soon though. 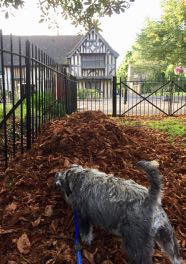 5. My dog inspecting the first leaf mound of the season and knowing what is to come. And what is to come is lots of leaf mould making opportunity. Last year’s lot, kept in scruffy plastic bags is maturing nicely and will go on the beds in a thick mulch in late Autumn. 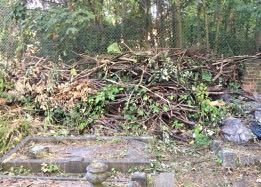 6. What do you see? I see victory. Or at least a big step in the right direction. This churchyard was a dense bramble, ivy and sapling patch two weeks ago. The Waltham Forest Community Payback team have worked really hard to clear it. The mound of meadow grass now has a massive additional layer on top and there is plenty of additional wood to season. Great wildlife habitat to make up for the great wildlife habitat that was cleared. I try to manage the site in a wildlife friendly way, balancing that with the needs of visiting relatives, the homeless and mentally ill*. I have planned a species enrichment plot, container pond, meadows and alpine trough next, but we will see how we go with all of those. This site also used to be home for up to 25 rough sleepers over the Summer. This morning, we were down to two and a dog. I do not count that as part of the victory. They are just down the road. However, the bottles, cans and needles are gone. At the very least, it is a more pleasant space for people to rest in peace.

*Great job application this week: “I am a former criminal drug addict with mental health problems, on medication. I can’t do much. I just want a bit of voluntary work. You’ll have to show me what to do.” You’re hired!