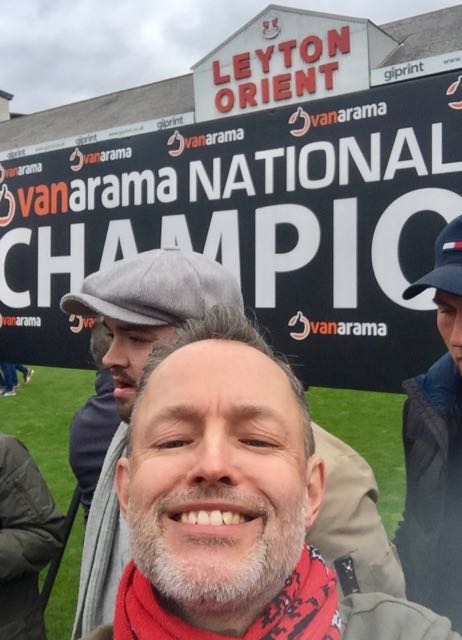 I have been a bit obsessed in recent weeks by my long term love, Leyton Orient F C’s promotion from the National League to League Two. Confirmed today with a glorious 0-0 draw, at home, to Braintree. What can we conclude from this? I must learn to take more flattering selfies. Never to drink and blog again. Still, here goes.

2. Matthiola incana Alba. Grown from seed last year, it has been a long wait to get to this stage. The leaf is a grey rosette which is pleasant enough. The flowers are pretty. But it is the scent which knocks you down. Like frangipani and concentrated vanilla essence. When someone has a B.O. problem and pours half a bottle of aftershave over themselves.

3. The humble Osteospermum. An unknown white cultivar originally from my mum. Forms a well behaved rounded mound for a start. This is a good thing next to a path. Then it flowers, and flowers, and flowers til about October. I might actually stop it in July for its own good. Give it a severe trim, take cuttings,  and wait for a better Autumn show. Good plant for sun and good drainage.

5. Tulip in the grass. I was given some Tulips from the London Parks and Garden Trust late in the day last year (December). They were hastily found a home in the funeral urns along a strip of the churchyard. Now, nearly subsumed by grass, they look like giant drops of blood in the meadow. If that was ever a poetic image…

6. So, Erysimum Ruston royal was a bit rubbish last year. Not as floriferous, not as long lasting as the ubiquitous Bowles Mauve. This year, week three of flowering, it is better and has playmates in Miscanthus sinensis Morning Light, Tulip Beauty of Holland and Opium poppy foliage. A nice little scene.